People all over the country were waking up dis’ morning to the news of Britney
Spears getting married, finally justifying the Orange Terror alert level. But
if the websites reporting news are correct, and when are they not, Britney
Spears has married former Seinfeld star and current unemployed loser, Jason
Alexander.

We at first we were shocked, then realized we didn’t care, then we sat around for
a while quoting Family Guy episodes (Heh, Heh “What do you want me to do? Whack
off a guy? Off a guy? Whack off a guy?”). Then after getting tired off that,
which didn’t take too long, we realized we hadn’t updated the website in a
while, so we called a couple of our connections to Britney Spears and managed
to uncover this photo: 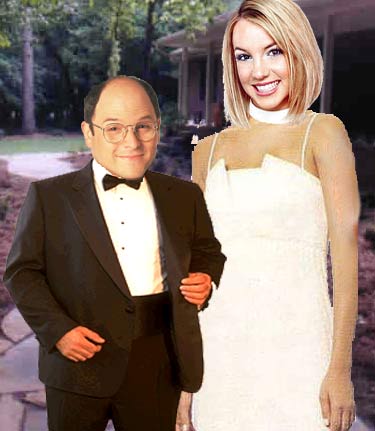 In this cheesegod.com exclusive photo we see without a doubt that this
marriage is real. After Justin Timberlake and now with Jason Alexander we see
that Britney has some kind of annoying loser fetish. Something that will make
many of her fans happy, which according to a recent Wall Street Journal poll
80% of the people who buy her record are annoying losers (the other 20% buy
them as joke presents for their friends).

So can the future hold for these two? Wacky sitcoms? Perhaps a Sony and Cher
type show? Let’s sure hope not.