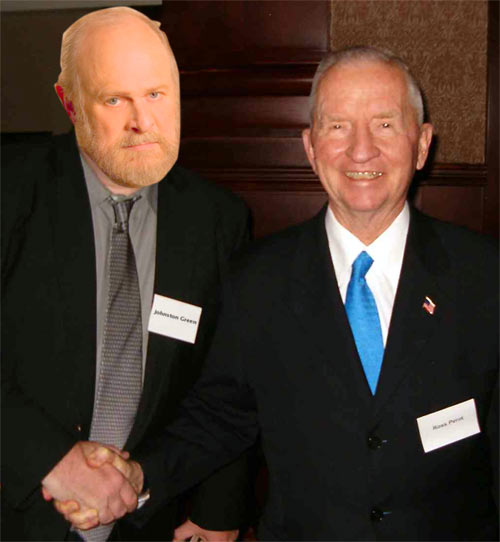 Johnston Green received a boost to his fictional campaign today when a confused and disheveled Ross Perot endorsed him for president.

“America needs to be saved from the female Clinton and the Sugar Cain.” Perot told two journalists and a dog named Spike, “It is time we act, and forget about reality shows.”

Johnston Green is a character on the unwatched CBS show Jericho. Why Perot was endorsing him for president is anyone’s guess.

Everyone in the room seemed confused, including Gerald McRaney, the actor who plays Mayor Green.

“I have no clue. Perot called me up and said he wanted to endorse me. I wanted to refuse, but CBS said it would be good publicity,” McRaney told us.

When asked why he was endorsing a fictional person for president Perot responded, “Jibba-Jabba! A fictional man, for a fictional post. There is no president, it’s all a lie!”

Which, of course led to the question if the there is no president why did Perot run for the office in 1994 and 1996.

“The reason!,” Perot suddenly jumped onto the podium in mid sentence, “Sometimes I wish I was also fictional.” Perot then hung his head down and quietly sang Livin’ La Viva Loca to himself.

It’s not sure how the endorsement will effect the current presidential campaign, but experts think it might shift the all important crazy vote away from John McCain.

“I don’t know,” McRaney responded in response to how the elections might be affected, “All I know is that Perot smells like Moth Balls and Mr. Pib. It’s going to take weeks for me to get the stink off my hands.”

Alec Baldwin Wants To Be Mayor on Foursquare