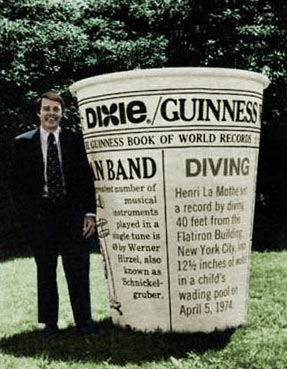 Have you ever wondered what the story is behind the world’s largest Dixie cup? Yes, no, maybe. Hmmmm…. Well here it is anyway, wise ass:

Jason Jacome wasn’t rich. He wasn’t even poor. He had his wife, his 2 children, his pet cat, and even a cool little donkey figurine that dispensed cigarettes out it’s rear. But Jason dreamed of bigger things… literally.

Every night was the same for Jason, he’d wake up mid night with the image of the paper rim rushing through his head. All day at work he would doodle little drawings of what he pictured to be quite the large object. At home Jason would lock himself in the bathroom for hours, staring at the Dixie cup he would hold in his hands.

Finally one day, after reading an inspirational Ziggy comic, Jason took a leave of absence from his job, emptied his savings account, and sold his ass butt dispenser.

At first Jason’s family was supportive. His wife assumed it was just a phase Jason was going through, kind of like that week where he wore Bermuda shorts and spouted nothing but quotes from Ernest Goes To Jail.

But as the weeks passed, Jason continued to spend every moment he had in the basement working on his creation. As the bills piled up, and the children grew tired of eating what was left of the cat, Jason’s wife decided she had enough.

The fact that his wife left him didn’t matter to Jason though, because he had just discovered he could make progress much faster by using Elmer’s white glue rather than the blowtorch.

Then one early Wednesday morning, the deed had been finished. Jason took his mammoth cup outside and proudly displayed it to the world. Neighbors gathered around and stared in amazement, local news reporters interviewed him, and school children would hold hands around the cup and sing songs of joy.

For a while life was good. But just like Twin Peeks, people eventually grew tired of it. The neighbors stopped looking, the reporters stopped reporting, and the school children were hit by bus. Worse yet, the bank took his house back, his wife and children were still gone, and an effort to sell the Dixie cup on eBay was foiled when UPS couldn’t fit the cup on the truck to ship.

Now, Jason lives, all alone, inside his cup. But, if you ask him what his one regret is, he won’t tell you that it’s the fact that his family is gone. Or that the closest thing he has to a house is his cup. Or that his cat gave his children indigestion. No, his only regret is the fact that the cup doesn’t have a roof.

“Everytime it rains at night while I’m sleeping I almost drown.”

Moving Out On Your Own