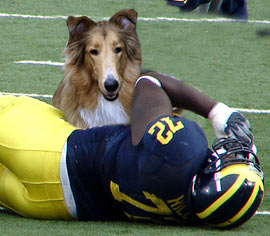 International movie star Lassie was arrested this past weekend after being suspected of running illegal football games in his Hollywood estate.

Cops paid a visit to Lassie’s home on Friday night when neighbors complained of a foul odor coming from the area. Inside they found an illegal football game in progress being watched and held by a number of high rolling canines.

“It was awful, it’s turns out the bad odor was the Cleveland Browns,” Officer Mike Neil told us, “I haven’t seen anything that made me this sick to the stomach since Mr. Bean’s Holiday.”

Many of the football players were injured with strained hamstrings, scraped knees, and hurt feelings. One player yelped in the corner because his helmet was too tight.

Ingred Termso of PETA (People for the Ethical Treatment of Athletes) spoke out the issue earlier today on a televised press conference.

“It is horrible. Horrible. When will American learn that they are evil. Watching these ‘sports’ is not fun for anyone. You are all sick. You should die. You are dumb. What is wrong with you guys? Listen to me. It is not natural. Watch some paint dry or a nice game of Monopoly. These are fun, ethical alternatives. You are evil if you like sports. You will pay,” Termso went on like that for a while… probably, I don’t know, I was too busy paying attention to the Met’s score scrolling across the bottom of the screen, and too lazy to hit the replay button on the TiVo remote.

Meanwhile matters have gotten worse for Lassie, whose real name is Haig Lassaderian. It is now being reported that as many as fifty bodies of football players have been dug up from the backyard of her house. Many electrocuted, some hung, a couple drowned, one killed with kindness.

Lassie was scheduled to begin shooting a comedy next month with Chris Tucker and Michael Ian Black about a two men who give birth to a dog, but the project now seems like it’s in jeopardy.

“Damn it,” Black told us, “Every time I’m about to finally hit it big something goes wrong. First my annoying personality, then my lack of acting ability, and now this.”

All may not be lost however.

“Did you hear they’re going to make another Pink Panther movie with Steve Martin and John Cleese. I didn’t think the first one did that well,” Officer Mike Neil told us.

We’re not sure what that has to do with anything, but he said it.

The Mets Are On LIfe Support…