Britney to star in V for Vendetta Sequel 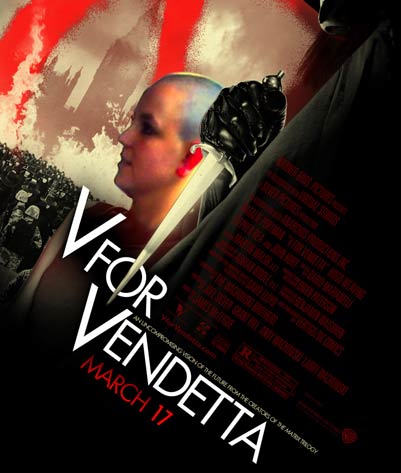 Britney Spears has announced she is now fully ready to star in the V for Vendetta sequel, planned to start shooting this March.

“I’m so excited about playing the role in this film,” Spears told us on her way from her monthly Mensa member meet up, “the first was so groundbreaking, and I hope to help bring the sequel to an even higher level.”

Spears has been preparing for the last month for the role. She shaved her head for the role, and entered R.E.H.A.B. (which, as we all know is an acronym for “Really Engaging Helpful Acting Braintrust”).

“Everyone has been so supporting,” Spears said, “My ex-husband, Kevin let me practice my sword moves with an umbrella against his car, and even the media has chipped in.”

Spears explained to us how the mainstream media has published fake stories about her so she know how it feels to be alienated and have the world against her, much the way her character feels in the upcoming film (tentatively titled ‘W for Wearisome’).

Well Britney, we look forward to seeing you in your best film since “Crossroads” and we salute you for being America’s sweetheart!