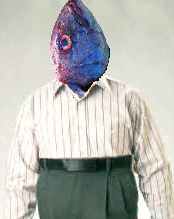 So Steve Irwin, The Crocodile Hunter, is dead. Killed by a poisonous fish. I hope no one is surprised. Everyday this nut with sneak up on dangerous animals and wrestle with them for no reason. Every segment on his shows would start off by him saying how dangerous it was and how no one should attempt to do it… then he’d do it.

Irwin died while filming a TV show, and I hope this segment also makes it on his TV show. It’d do the public good that doing stupid things and acting like an idiot does have consequences.

So, today we mourn the death of the crocodile hunter. In fairness he did lead a movement for better treatment of animals, which, again, I guess included him wrestling them. He also had a wife and child. You may remember the controversy a couple of years ago when Irwin was feeding crocodiles while holding his young child.

So, now that Irwin is dead I’m sure the Discovery channel is already planning it’s one week long tribute to him by rerunning all his greatest hits and are salivating just thinking about the ratings.

No one should ever die. Especially those with family. Sometimes though, you just can’t really be that surprised.

The Fake Shemp and How Producers Killed Curly