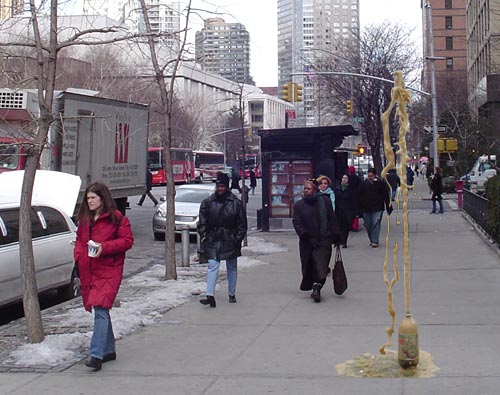 Terror spread through the people of New York City again when terrorists once again unleashed an attack on the streets of Manhattan… kind of.

Using instructions that can be found on such terrorist friendly websites like youtube, terrorists were able to make an horrendous combination of Mentos and Diet Coke to cause an “explosion” of soda foam.

“Well, the streets kind of got a little sticky I suppose,” terror victim Joe Orsulak told us, “But then again the streets are always kind of sticky around here.

Officials took instant measure by banning all liquids and mints from the city of New York, even though only diet sodas can cause this “explosion”.

“It can’t hurt anyone to be too safe,” Mayor Bloomberg told us from his new solid gold throne he had built in Times Square, “if the banning of liquids proves to unsuccessful in stopping these attacks, we will simply have to ban people as well.”

Many New Yorkers passed out and and to be hospitalized due to dehydration causing some to question the liquid ban. Bloomberg and other government officials simply waved them off saying they were “unpatriotic, flag burning, Al Queida loving liberals.”

“I don’t really see what the big deal is,” onlooker Craig Montana shrugged, “You could pretty much get the same effect by turning on a garden hose.”