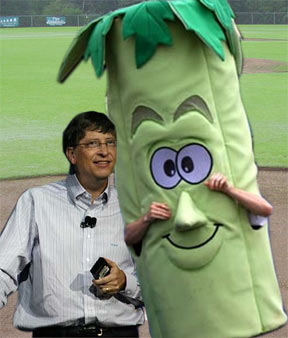 Bill Gates announced his retirement from software giant Microsoft in order to pursue his personal dream of becoming a baseball star.

Gate’s father had dreams of his son becoming a baseball star and tried to practice with him each day after school, but little Billy often chose instead to work on computers.

“That damn kid was always readin’ on computers n’ stuff, “Gates Sr. told us, “I tried to set that boy straight, teach him the fundamentals of baseball, but that kid was too busy with his little nerdy friends. What a disappointment he was.”

So, in order to win his father’s affection, Gates has joined minor league team The Seattle Ligers. The Ligers is a brand new AA team created just this year, by Gates himself. Gates had attempted to join numerous real teams, but even AA minor league teams which often are desperate to attract fans in any way they can would not have him. The Delaware Blue Rocks offered him a position as the towel boy for their mascot Mr. Celery, but Gates refused when the refused to convert their scoreboard from Linux to Windows.

The Seattle Ligers was created from they money Gates earned on royalties from Microsoft Bob. Gates has appointed himself manger, cleanup hitter, shortstop, general manager, owner, and towel boy for the team.

The team is currently made up mostly of Microsoft interns. Gates had attempted to sign some big names to the team, but was unable to because no one wanted to play with him.