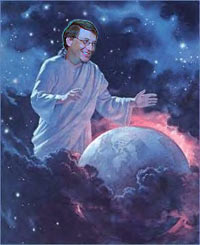 Redmond, WA – Attendees of the monthly Microsoft snuggle party were amazed when it was announced that Microsoft had successfully purchased port 80 from the US Government.

In front of huge television that displayed giant Microsoft logos and very happy people in various active stances for no reason around them, the Microsoft chairman Bill Gates dropped the bomb.

Port 80 is the way most Internet browsing traffic is sent. Without port 80 most programs such as Internet explorer, Email, AOL instant messenger, and Bonsai Buddy would not work.

When asked how much Microsoft had paid the US Government for the port, Gates refused to answer. Not because it was a secret, but because he didn’t have all day to say such a large number. Although blogs everywhere have been circulating rumors that Microsoft bough out congressmen by promising them an appearance as warriors in Age of Empires IV.

Microsoft ensures that now that they control port 80 they can keep it better secure and that their browser will now be more secure. Of course the only way they control this is by keeping Internet Explorer the only browser that can work. Gates told us effective next month browsers such as Firefox, Opera, Safari, Netscape, and Scumsucker will no longer work. It should be noted Scumsucker is not really a browser, or any type of program for that matter, but was just made up by Microsoft employees because they think it’s funny when Gates says “Scumsucker.”

The snuggle part went off without a hitch and there was only two reports off someone trying to “cop a feel,” both by Hector Ruiz.