Commodore now on the Intel Mac 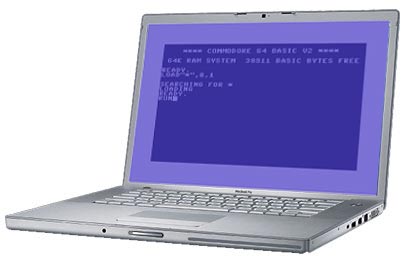 Computer enthusiasts spewed with glee today when a anonymous hacker posted snapshots on their blog of the new Intel based Mac Book Pro successfully booting up the Commodore 64 operating system.

“Finally, I can play my Ghostbusters game I got. I haven’t been able to play it since my wife through my Commodore, mistaking it for an old toaster oven,” said one commenter on the blog post.

“Commodore 64 FTW!” said yet another.

After successfully booting up Mac OSX, Windows XP, and Linux on the same notebook geek and nerds have been searching for the next great thing to boot up on the system. Finally one website put out a call for the Commodore 64 to be placed on a Mac and offered a bounty to the first person to pull it off.

The bounty began at $10, and after a series of donations from other fanatics, the reward was raised to $12.84 and an opened box of Super Mario Fruit Roll-ups.

Steve Jobs of Apple Computers, who recently became the largest share holder of Disney, was unavailable for comment as he was too busy ogling, er… observing the actresses on the set of Desperate Housewives.

Meanwhile the nerd community is hard at work on modding the mac book to double as a George Forman grill.