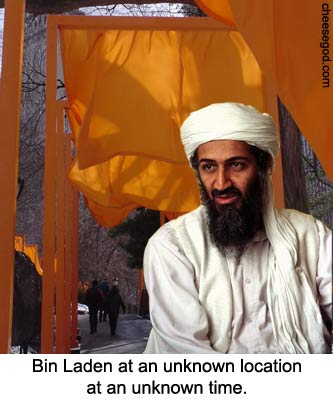 As you no doubt have already heard, Bin Laden released another tape this week to put to rest the rumours of his death and to offer a truce. No one has yet to post a full transcript of this tape yet because of warnings from the FBI that a certain wording may trigger a sleaper cell or swomething. However all of us at cheesegod.com are jerks and are posting it anyway. Here is the full transcript of the exchange:

Good afternoon, this is Osama Bin Laden, AKA Usama Bin Laden, AKA Henry. I speak to you today to dismiss the rumors of my death. No, it is impossible for me to be dead, for the dead can not make audio tapes. Especially not audio tapes that are of as high quality as this one. I used a TDK brand cassette tape, I find the their quality is quite the best. Maxell is okay, even Sony makes a pretty good tape, but for death threats to come out their clearest I believe TDK is the way to go.

Some American imperialists may have you believe that the dead can make tapes. The American Thomas Edison even invented a phone to talk to the dead, but not a phone for the dead to talk to the living. He did invent a phone for the dead to talk to other dead, but that’s just silly. Unless you are dead, then in which case this could be a possibility that I too am dead. But if you are alive, then you know fully well that I too am alive. Americans like to make shows like Medium and Crossing Over where dead people communicate with the living, but that’s just all bullcrud..

Now, moving on from this whole dead thing, have you ever wondered what TDK stands for anyway? A friend told me it stands for “The Demonic Kangaroo,” but I don’t believe him. I asked him why someone would name a cassette tape brand that. He said that it’s because they make things other than cassettes, but still, seems silly to me. I bet he lied.

What? I’m running out of tape already. Damn it, I told them to buy the 90 minute tapes, Jesus Christ. Alright, alright. Man, I didn’t even get to make any death threats yet. How much time… okay, okay.

Listen folks. There will be more attacks on America… um… let’s have a truce… We’ll rebuild Iraq together.. let’s end this fussin’ and the feudin’. I’ll take you to a movie. I heard that Brokeback Mountain is pretty good, but two guys making out? Bleh. Not my cup of tea. I much rather see Cheaper By The Dozen 2, that Eugene Levy cracks me up. I just downloaded The Man… oh crap, there I go, rambling on again. See you later, gotta go. Peace.

How Do People Live So Long In Japan? They Don’t Tell Anyone They’re Already Dead!