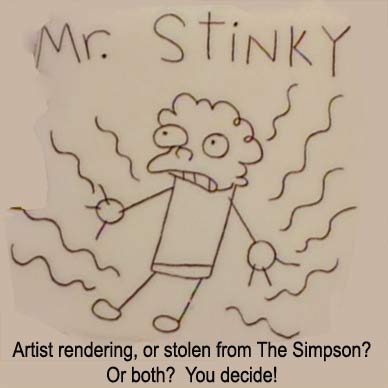 So why did Tom Delay resign as senate leader? Was it the allegations of illegal activity? Was it the pressure of having to justify having such a great parking spot in the senate parking lot? Or was it his horrible odor?

Even John McCain took notice when Tom Delay would walk into the senate floor. Despite having nasal surgery two years ago the ripe odor of Delay was enough to make him vomit. Did Clinton really try to hold the elevator door for Delay, or did she purposely let it close on his face so she wouldn’t have to be in a confined space?

Delay says he retired to spend time with his family. But are you aware that democrats brain washed Delay into thinking this? Democrats were afraid they would not be able to filibuster with Delay in the room, no doubt the odor would be too much for them all to stay indoors that long. Delay actually doesn’t have a real family, just a couple of Mexican immigrants he paid to play the part of his family for campaigning purposes.

Unknown to most people, including everyone, is the fact that Ted Kennedy also has a unique smell that most people do not like. At a party Strom Thurman once remarked that Kennedy’s odor reminded him of whiskey and chicken pot pie, a delicacy that Thurman often enjoyed in the old phone booth behind the official senate McDonald’s.

Could it be that Tom Delay’s odor was not real, and just made up by the left to further embarrasses the right? Could perhaps the saying, “Thou who smelt it, delt it” apply to the left as well? Might the left be going too far this time, perhaps either further than that time they put that poisonous cobra in Ronald Reagen’s underwear drawer? Is it possible that having a paragraph completely composed of questions is not considered proper writing?

These questions return no results when submitted to Ask Jeeves, so therefor must be unanswerable. Perhaps we are best off coming to our own conclusions. What’s my conclusion, and therefor should be yours too? Money. Follow the money and, well, if your following money it’s probably being pulled by someone with a fishing line having a laugh at your expense. And that makes you a patsy. Good day.