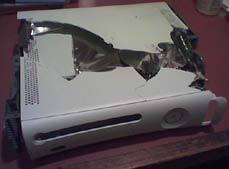 As you know something called the Xbox 360 was released last month. And many people are unsure of what this product has to offer. Of course these people are idiots. And these idiots quite possibly could be the same idiots who read this site. So I present as a courtesy to these idiots my Xbox 360 UFAQ (unfequently asked questions).

The 360, contrary to popular belief, does not refer to the number of systems actually released on launch day, but actually refers to the temperature that the system reaches.

How big is the X-Box?

Surprisingly small. After the travesty that was the 22 foot long original X-Box, the 360 has really slimed down. Unfortunately the power supply is now so large it can be used as a TV stand.

What good games are available?

Well, there’s Project Gotham Racing 3, and um…. let’s see. There must be something else. Call of Duty 2 is pretty realistic if in World War II soldiers had a hard time aiming their weapons due to first person shooter controls. Also there’s some cool oldschool arcade games available through Xbox Live, I can’t wait to play games from 1975 on my console made in 2005.

How much does it cost?

Is it energy sufficient?

What can the 360 do besides play games?

It can play DVDs, just like your DVD player you got marked down at Target for $49 already could!

It plays MP3s! Cool! I wish my computer, DVD player, Airport Express, cellphone, or iPod could do that!

The powersupply doubles as a space heater!

Roller Shoes: How to hurt your kids