US experts are taking a close look at the authenticity of video from Iraqi TV of a Hussein speech.

“Well we’re split 50/50 right now. Half of us think him. But the other half is just not convinced,” Pentagon spokesman Jake Propaganda told us, “The other half doesn’t exist because it’s not possible to have more than two halves in a whole. But if we could have a third half we’d probably make them out to get us some pizza, I’m starving.”

Whether it was real or not it was enough to rally the people of Iraq to dance in the streets for the eighteenth time this week. The only evidence torture that seems obvious so far against the civilians of Iraq, is his ability to make them dance like idiots.

Here’s the evidence the CIA has presented to the public on why the video may be fake. The picture at right below shows a still from the latest video along with letters pointing to different spots. The letters correspond to those on the left with why these spots are of interest. 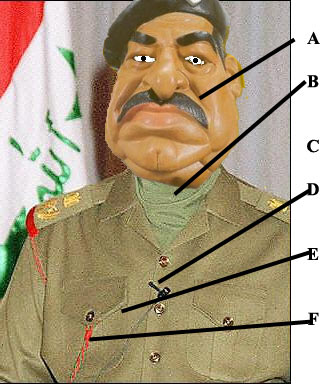 A) Mustache Wax used appears to be different brand than normal

B) Who wears a turtleneck in the desert

C) Sorry, I forgot to draw a line from C… I’m not sure what that was for

D) Microphone used is a Sony, not Hussein’s favorite, Casio.

E) Pocket doesn’t contain Camel Cigarettes, the type many experts believe Hussein would use if he smoked.

F) This line of Red may be blood. Perhaps from being shot. And as you know, the real Hussein was bombed not shot.