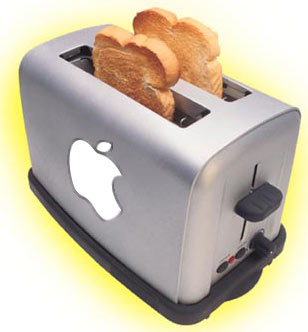 At Macfest 2004, the biweekly Apple show-off fest, the greatest portable gadget ever made since the iPod was introduced.

"People have been waiting for years for such a gadget," some Mac geek in attendance told us, "at long last we can toast bread on the go."

"Just as you once could only listen to your mp3s at your house, you can only currenlt toast at your house," Steve Jobs told a crowd of adoring nerds, "Now we have taken a step forward and brought the world the first portable toaster."

The iToaster is expected to retail for about $300 and debut on the Apple website this spring. The iToaster mini is expected to debut later on. It only can toast a single slice at a time but will cost about $50 cheaper. And it will come in different colors. How cool is that? Huh.... well? ANSWER ME GOD DAMN IT....